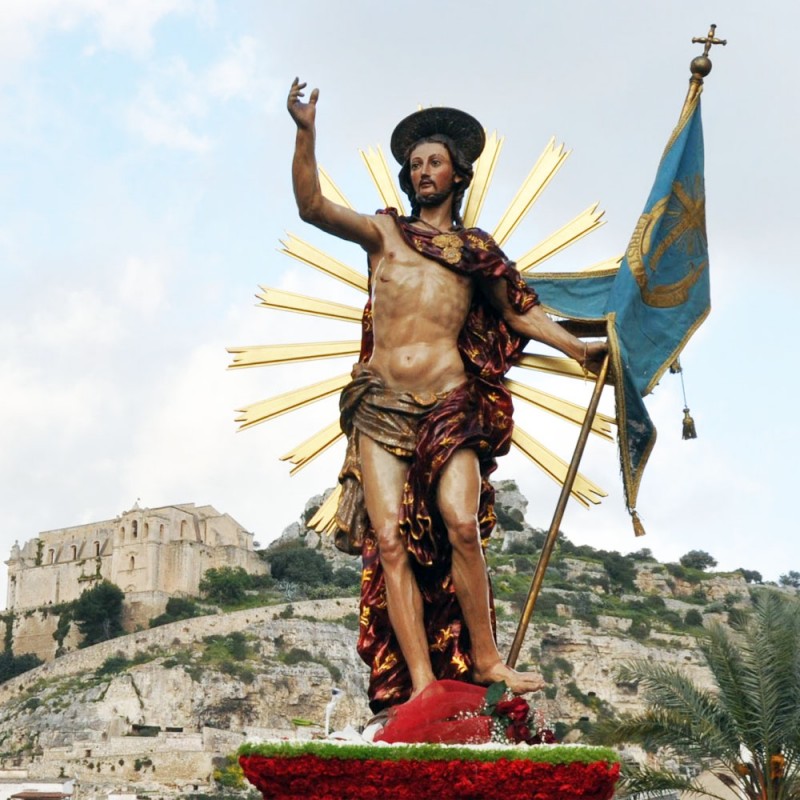 The Man Alive Festival, Procession of the Risen Christ, affectionately called Joy. At the climax of Holy Week, Easter Sunday is celebrated the Resurrection of Christ - said the Man Alive - with cries of joy, which in essence the 'u Joy (with the article in the masculine). The wooden statue of Christ, the eighteenth-century work attributed to Civiletti and guarded in the Church of Santa Maria La Nova, is carried in procession through the streets of the city and made to sway and dance in a sign of joy throughout the day until late. Recently the singer-songwriter Vinicio Capossela has dedicated a song (Ode to Joy) to this feature party.
At about eleven o'clock from the church of Santa Maria la Nova comes the procession of the Venerable, that of SS. Sacrament. The tail of the processional march is not yet out of the church when a numerous group of young people takes possession of the statue of the Risen Christ. Raising vigorously to the maximum height of the rods sedan with raised arms, young people repeatedly shouting all together: Joy! Joy! Joy!
At about twelve o'clock comes the wooden statue dell'Uomu Vivu. No one can remain indifferent at the first sight of a ritual like that, the launches of flowers from the faithful balconies around the statue, then the joy is carried around the streets of Scicli, in a triumph of thrusts and levers, he screams and ran culminating in turning, in front of the churchyard: the young bearers begin to turn the statue on itself, forming a circle of bodies and wood. The participation of people is total, as it is obvious their love for Joy. The same word expresses affection and incredible emotional closeness and the ability to look to Christ as a human being, the man I live indeed.
Somewhere between the church of Santa Maria La Nova and Carmine the procession stops and starts frequently, come back and then stops to watch the spectacular rounds of the statue until it begins a storm of deafening gunfire coming from the hill of San Matteo.
The Joy then proceeds to Piazza Busacca: the carriers proceed faster and slower, alternating the rhythm and the pace, around the square, the center of which is the statue of Peter Di Lorenzo Busacca. At one point, when the carriers are exhausted, they give the last lap and leave the statue in the nearby Church of the Carmine. 1 other products in the same category: