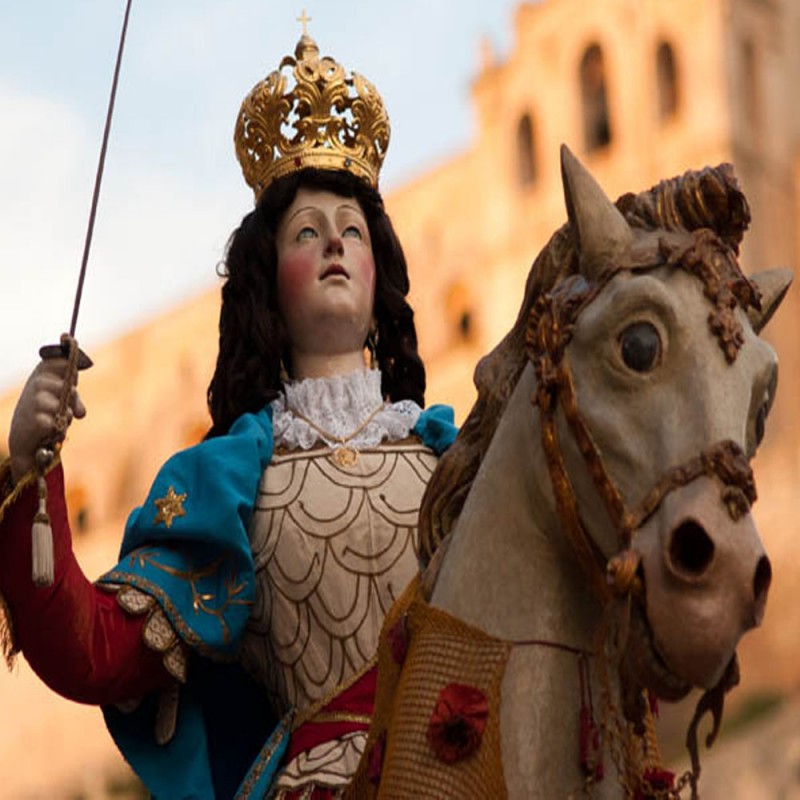 27 MAY 2017 CELEBRATION MADONNA OF THE MILITES

CELEBRATION  MADONNA OF THE MILITES

Festival in honor of the patron saint Our Lady of the Militia and historical re-enactment, in Scicli - The Feast of Our Lady of the Militia is a sacred representation of the feat of arms of 1091 between the Normans of Count Roger de Hauteville and the Saracens led by the Emir Belcane.
The last Saturday of the month of May in Scicli there is the Feast of the Madonna on horseback or Battle of the Militia, during which we honor today still an eighteenth-century painting and a statue of the Virgin with sword in hand and wearing armor, on a prancing white horse harnessed to the war: the Madonna of the Militia.
The anniversary is one of the most felt by sciclitani and represents the victory of the Normans on the Saracen which dates back to the year 1091 by Roger de Hauteville, which ended with the liberation of Scicli from Saracen rule. It is said that the final battle was won by the Christians through the intercession of Vergine Maria on a white horse fell in defense of Scicli. The theatrical performance sees facing groups of Turks (the Saracens) against Christian groups (the Normans). After long negotiations on the territorial control, it befalleth to a battle. The simulated battle ends, therefore, with the miraculous intervention of the Virgin Mary, who, descended from Heaven riding a white horse, free from the siege alien city.
The most awaited moment is the Sabbath, in which the places of battle are rebuilt and where actors in period costume, retrace the highlights until the intervention of the Blessed Virgin that frees the alien city from the siege. The Feast of the Militia is known around the world for being the only event commemorating the descent of the Virgin on horseback, armed with a sword, he saved the sciclitani from Saracen raids. Legend has it that the Christian victory was thanks to the appearance of the warrior Madonna, an event that brought about the decision to Roger to have built a church in honor of Our Lady of the Militia.
During the days of the festival are held side events such as the Festival of heads of Turkish, Scicli typical dessert par excellence, with its obvious reference to the battle that inspired the festival, and events during which you can taste typical products.

- Lunch in the restaurant.

- Afternoon dedicated to the visit of Scicli, meeting with the guide that will show us all the artistic beauties of the City and the "Montalbano Places", free aperitif.

- Transfer to go to the site quoted by the program;

- 1 Lunch in the restaurant;

- 1 Dinner in the restaurant;

- Everything that is not specified in the "include" entry.

- A deposit of 30% of the total amount will be required upon booking. The balance must be paid by bank transfer 15 days before arrival.

- Sicily Sea Holiday reserves the right to change itinerary if, for reasons of bad weather or other causes, it is not possible to visit the designated place.

In case of cancellation the deposit of 30% paid at the time of booking will be in no way refundable. The withdrawal is allowed up to 30 days before the service is served.

1 other products in the same category: