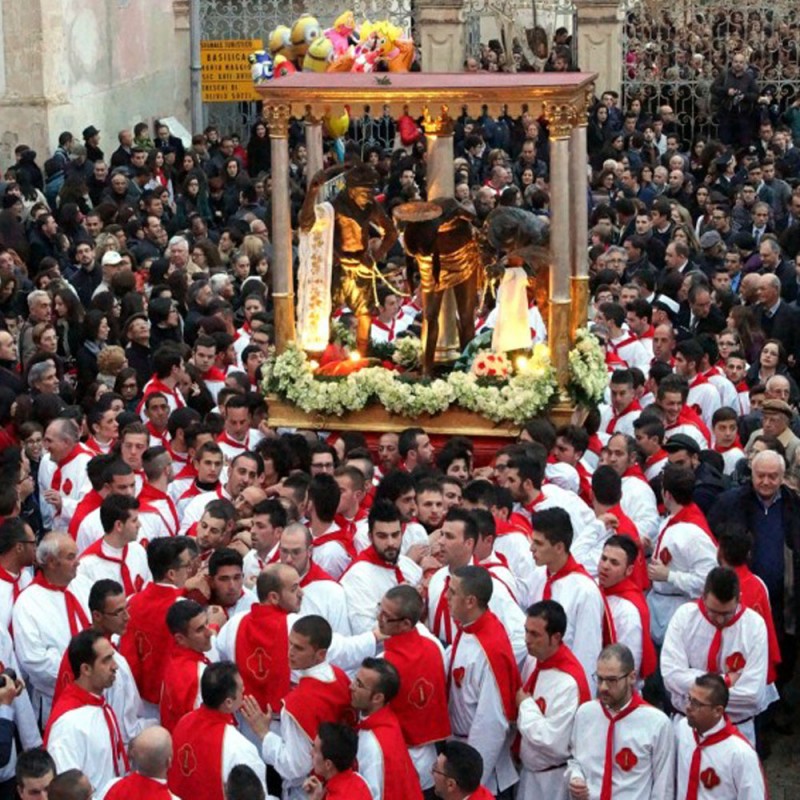 The Holy Week in Ispica is one of the most intense and exciting events of the year. Secular rites, gestures and traditions enchant visitors and enliven the devotees who are waiting now for a year and live it with deep emotion. The processions, the sacred representation of the Passion of Christ and religious services are organized by the two historical archconfraternities: that of the Santissima Annunziata (i Nunziatari) and Santa Maria Maggiore (the Cavari). The feast of the cycle begins in the penultimate Friday of Lent, with the procession of the Holy Cascia, which is for all Ispica 'u ra vènniri Santa Cascia. This is the day when you start to breathe in an atmosphere full of emotions. The Nunziatari lead in a silver urn procession 'in Santa Cascia, containing the relics of several saints and above' in Santa Spina, a fragment of the crown of thorns that was placed on Jesus' head. When the parade is part of the church SS. Annunziata starts another very intense moment: the Via Crucis. Thousands of faithful attending the suggestive re-enactment of the Passion of Jesus. After recalling the last moments of Christ's life, the crowd returns to the Basilica of the Annunciation where we celebrate the most exciting moment of the day: the Holy Thorn is placed at the foot of statue of Christ with the cross that is hidden behind a wooden wall. For Nunziatari start waiting day until Friday when it will unravel and embrace the statue of Christ.
Holy thursday. The longest day of Ispica.
On the night of Wednesday before Holy Thursday (around 1: 30) a long Via Crucis living part from the cave church of Santa Maria della Cava (in Cava d'Ispica) to get to the basilica of Santa Maria Maggiore. In the magnificent square which opens in front of the church are repeated scenes of the Crucifixion and the Deposition of Christ.
The crowd massed and waiting for the traditional opening of the doors. At 4:00 o'clock the pastor beats three times on the door of the basilica that will open letting the devotees who come running and bumping into each other at the altar of Christ at the Column ( 'u Patri in Culonna) where they kneel to kiss the altar . Finally the people regains its symbol and finishes the Thanksgiving ritual ( 'u ringraziamentu).
The liturgy began at night continues throughout the day. At 11:00 am the salt parish priest on the altar of Christ scourged at the Column, knock three times and slides down the doors that hide it. The air is full of emotion and pathos, the faithful shouting and are moved. Within minutes you complete the rite of scinnuta, the statue is finally among the devotees who can raise it to the sky. The band emphasizes all times with the traditional marches.
In the afternoon the statue of Patri in Culonna is carried in procession and while visiting the streets of the old town meets Sorrows creating 'U' ncuontru, the ritual in which the Sorrowful Mother bows three times before the Son. They are moments lived quietly and with great emotion.
Around midnight the procession is still around, the faces of the devotees are marked by fatigue but all are well aware that on arrival at the church the statue will be placed and will have to wait a year before you can again carry! The last climb is faced with a serious step, it seems that for every step forward made two are back. Carriers want to prolong as much as possible the time.
Once inside the Basilica of Santa Maria Maggiore the statue starts to turn, it plays the organ while the band pays the last march to Christ Column. Outside it is night, in the church is consumed the last act, when the statue is on the altar you can hear the latest shouts of greeting. For Cavari leave 'U Patri in Culonna is not easy.
Good Friday. Ispica dresses in blue.
Good Friday is the day of Nunziatari and Christ at the cross. Repeat the rituals that characterize the Holy Thursday: Early morning the faithful filled the church, around 11:00 after three rounds of the priest repeats the fall of the doors. Despite the noise echoing in church three shots ring out and anticipate the liberating scream: eppicciuotti, cruci, cruci, cruci!
The most anticipated and touching moment is the output of the simulacrum, u Patri in Cruci with his ailing eyes watch devotees. The atmosphere is full of emotion but everything is more orderly. The procession from the Basilica of SS. Annunziata is preceded by two Roman soldiers on horseback, on tour through the streets of Ispica meet the Sorrows carried on the shoulders Cavari.
Slowly the procession moves towards the church, while the band plays funeral marches. When it's dark for a while devotees decided to put Christ at the Cross in his altar, but not before having made the rounds among the aisles of the basilica.