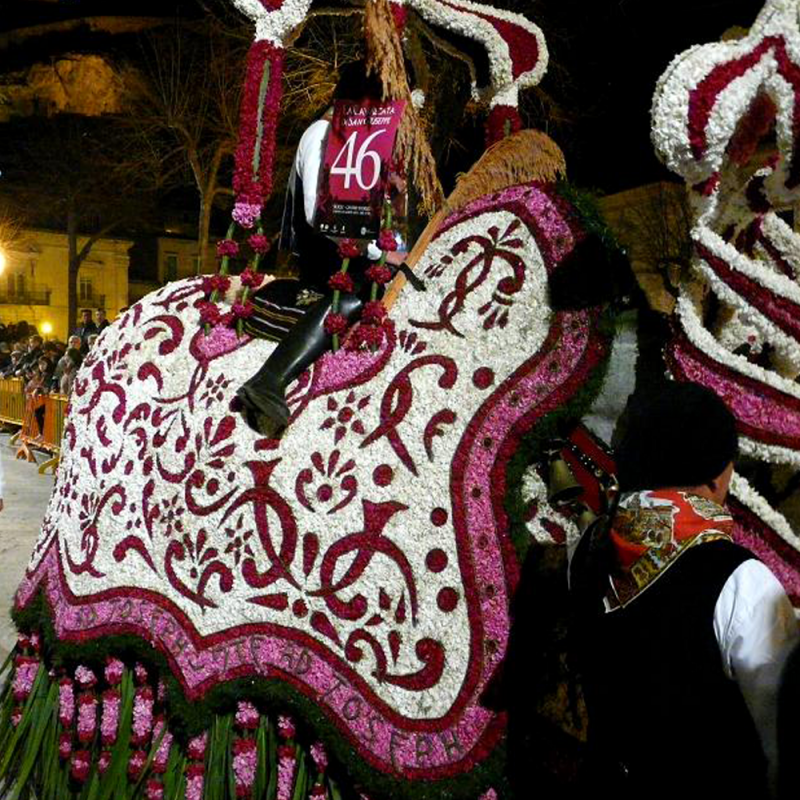 In Scicli, the Feast of St. Joseph is celebrated with historical cavalcade, a folk event in which the protagonists are richly caparisoned horses with blankets made by weaving a myriad of wallflowers flowers on jute plot. These elegant trappings parade through the streets of the city center, accompanied by riders in traditional costumes from farmers.
The festival is a commemoration of the biblical Flight into Egypt of the Holy Family, narrated by the Gospels, it takes place every year around March 19, in the neighborhood of the Church of St. Joseph. Engaged on a remnant of those sacred dramas are staged in the Middle Ages for a good harvest, it was gradually assimilated by Christianity to make it a religious festival in honor of the Holy Patriarch.
Ricca of suggestions is the long and laborious preparation of the extraordinary trappings of horses; in dammusi (rooms on the ground floor of the housing), a large number of people, on a warping of branches of palm trees, (now largely replaced by jute and sponge Teladi), weaves thousands of gillyflowers (u bàlucu), composing magnificent "squares" depicting the Holy Family and various sacred symbols.
The horses well harnessed, by squires dressed with the typical costumes of the country tradition, before parading in front of the Church of St. Joseph in the square and then Italy to be seen by the people and judged by a panel that will award the best. The noise of the bells tied to horses and the screams of the devotees - HOME '- HOMELAND' -PATRIARCA! - are the soundtrack to the mantles parades.
After the awards ceremony, the colorful procession with the Holy Family in the head, through the streets of the city where, in various places and neighborhoods, are turned on pagghiara, bonfires around which gathers people from the neighborhood waiting for the Holy Family pass . Around the fire dinners drink together.
In addition to religion, he adds color to the folklore competition Trai bardatori groups of participants, and in the race fielding the maximum effort in making artefacts of great artistic and handcraft. Best harnesses are then rewarded by the committee that organizes the festival. Characteristic also the clothing of the riders: a pair of corduroy trousers, with the cut carters, and a matching vest, dark colored, a white shirt with the sleeves rolled up, a very wide belt, handmade, of various colors , from which dangles on the right side, a big red handkerchief, a burritta with Giummo head and a clay pipe or cane. Four ciaccari, two in front and two behind the rider, cross-shaped, light the way of the horses. The tradition of the ride is perpetuated, unchanged for centuries.

On Sunday morning the trappings without horses are exposed in front of the Church of St. Joseph. In the afternoon there is the procession of the statue of St. Joseph seguti by hundreds of horses and riders. Finally at night, the festival will close with dinner, the traditional charity auction that takes place on the churchyard of St. Joseph.
During the event it is also held St. Joseph festival and tasting of local products sciclitani'u cucciddatu and Cosaruciaru bean.

10 other products in the same category: